STOP SEX TRAFFICKING Campaign by The Body Shop and ECPAT

Did you know that:

Distressful facts? - Yes. But are you guys already aware that there's something you can do to help?

The Body Shop together with ECPAT (End Child Prostitution, Child Pornography and Trafficking of Children For Sexual Purposes) recently launched effort against sex trafficking of children and young people. This campaign aims to influence and push governments to put more attention to it.


What you can do?

1) Go to the nearest branch of The Body Shop near you and sign the petition form. The signatured forms will be presented to the government in 2011 and sooner to the United Nations as they take the campaign globally. You can also sign online by clicking here. 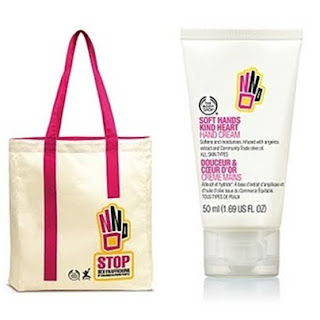 2) Buy the Stop Trafficking Bag or the Soft Hands Kind Heart Hand Cream. All proceeds will be donated to ECPAT so they could raise funds for the victims of the crime.

If you seek advise against sex trafficking or you want to report any suspicious incident, contact ECPAT thru the following:

Hi Kim,
In behalf of ECPAT, I would like to thank you for your support to the ECPAT-The Body Shop campaign. We were successful,we gathered the highest number of petition signatures in SouthEast Asia!
Btw, kindly for security purposes, delete my photos in your blog? We handle sensitive cases, some children with us have ongoing cases and it is not good for us to have our pictures online.
I hope you understand since i am using my own name here.
Maraming salamat!